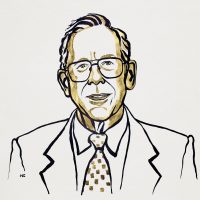 Mayor and Queloz have long been searching for universal truths in science, discovering the first planet outside of our solar system in 1995. This planet orbits a sun 50 million light-years away.

Peebles was awarded for interpreting tiny bits of radiation from the early stages of the universe to help reveal that any and all matter that we can see makes up only 5% of the universe; the rest is dark matter. or energy.