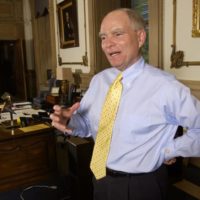 Time, I suppose, smooths all the rough edges, but I can’t let go of the thought that people in government – the politicians – once were of a gentler kind, although I know that it is not true. Ambition to do good either for themselves or for others — occasionally a pleasant blend of both – has always driven those who seek public office.
They have always been with us, the politicians. But it is mostly those around us at the moment who rankle, irritate, outrage us. As elections come and go, so do those who we either admired or despised – and we all have some of each.
It was no less a philosopher than Merle Haggard who told us that “time changes all it pertains to, except what we choose to recall.” And so it is.
I have a long list of politicos who, if memory serves, did pretty well at that fundamental chore shared by all who would lead us: Determining who gets what and when and how much. That’s what it all gets down to in this place where we live. In theory we all do our part, earn our keep, attain what is attainable, achieve what is achievable. Government has to be there in our civilized and shared society, lest we choose to return to the cave and club one another to death in pursuit of the woolly mammoth. And we leave it to those who staff it to dispense our shared wealth: Public lands, water, air quality, education, protection from invaders, food resources . . . and delivering the mail.
We can and do squabble endlessly over size and scope of government. Republicans, Democrats, socialists, communists, doves and hawks, liberals, conservatives, leftists and rightists. That is not unhealthy, although sometimes, such as right now, it can be hard to accept that necessity.
Think for a moment of Lee Hamilton, that courtly congressman from southern Indiana who is still with us and sharing his experiences with the youngsters at IU in Bloomington. Or Birch Bayh, the young man from Shirkieville over in Vigo County who authored two amendments to the Constitution of the United States and fought for another that would have guaranteed gender equality for all of us. Or Bill Ruckelshaus who stood firm in the face corruption. Or Dick Lugar, who wanted to rid us of the threat of blowing up the world. Or Ed Roush, a young man from Huntington who had the idea to give us all the security of being able to pick up the phone and dial 911 in moments of great danger. Or Ed Whitcomb, who endured the Bataan Death March of World War II and then came home to lead us Hoosiers in peacetime.
Someday, but not just yet, we might add Mitch Daniels and others to that list. Remember, it takes time to smooth the rough edges. We just now understand what Harry Truman and Ike gave us. It required 75 years.
And yet another who I am thinking of today because he is struggling with the demons of dementia and likely can’t recall that he gave so much of himself to this need for protecting and nurturing each other. First in Vietnam and then in South Bend and Indianapolis and then to all Hoosiers as Governor.
Joe Kernan. Always Joe. Never Joseph. No fancy titles, not even his military rank when he was shot down over Vietnam and spent months in the horror chamber of the Hanoi Hilton. And that reminds us: We need to add John McCain to our list, don’t we?
I remember walking down the hall from my office 20 years ago and encountering a fellow in the hallway in shirtsleeves and a broad smile. “Help ya? “ I asked. He extended his right hand. “Joe Kernan,” he said. That’s how I met the 48th governor of the State of Indiana.
He had come home from the war as a freed and damaged POW; they all were. He had done enough but wanted to do more. Mayor of South Bend longer than anyone else, Lieutenant Governor of Indiana, down the hall from Gov. Frank O’Bannon. Then he had to step up again when Frank O’Bannon died and was governor of his state from 2003 to 2005.
He lost an election to Mitch Daniels and went home to South Bend. Worst part of being governor, he told me a few years later, was having to ask for money for campaigns. Hated it, he said. We need to find a better way.
Now 74, stricken with Alzheimer’s, he is no longer capable of speaking. Others are speaking for him. Denise Sullivan, who worked for him in the mayor’s office, tells this story:
In those days, there was a home on a busy street with the front yard adorned in colorful flowers. Driving by one day, Joe stopped, fished out a card he carried to jot down complaints and wrote “Thanks for making South Bend so beautiful. ” He tucked the card into the front door and left.
“Who does that?” asked Sullivan. “He just took that little moment to say thank you for somebody planting flowers in their yard.”
Now it is our turn to say thank you, Joe.