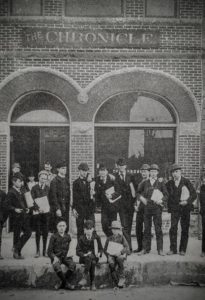 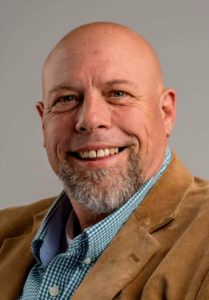 We’ve all had it happen, I’m sure. Someone parachutes into your life or the life of your little community. He or she kicks up a lot of dust, fixes things, changes things, discards and rearranges, drops new ideas, occasionally gets everyone in an uproar. And then, just like that, they’re gone.  Vanished. Sometimes on to a new challenge. Sometimes with explanation.  Sometimes not.

It happens a lot in corporate America. I recall coming into the office very early one morning years ago and meeting my boss on the steps. He was carrying out boxes of his personal possessions. Gone that day, vanished, a new assignment several states removed. There would be time for goodbyes later.

We here in Marion experienced that kind of jolt last week, but it wasn’t one of those corporate things. It was far worse, far more final. Infinitely more painful for those of us left behind.  The call had come from God.

Rick Berbereia, a man who was a big bundle of faith and energy and good feelings and who had been with us only long enough for us to come to love him, was gone. Dead at 58 – only two days into his 59th year. Cancer was the cause, as it so many times is.

In the days since that Thursday, I have learned that there were, really, but two kinds of people in Marion: Those who knew and loved him and those who had not met him yet.  And they were many, because Rick’s time in Marion was as a missionary – literally – and he devoted his time to nurturing his mission, his parishioners,  his congregants. There had not been a lot of time in those five years  to cultivate friendships and relationships beyond those he had been summoned to minister to. I like to think that, had he been given more time, he would have found folks with whom he could simply kick back and have some fun.

But his relationships were triangular; he, thee and the Grant County Rescue Mission.  If he had the time to spend with you – as he did with many of us – it was mainly because we could bring something to the cause of helping him preserve, grow and expand the Grant County Rescue Mission. To write about it, to find work for his graduates, to raise money to do more and better on what he was already doing.

He had found somewhere a little high-tech gizmo that resembled a miniature slot machine. Insert a credit card, it would provide a lot of flashing lights and relieve your bank account of $25, or whatever the programmed amount was.  He knew I was a sucker for the thing and would play to win. We both knew I was donating to the rescue mission and we both had fun. We were both doing the right thing.

Rick was Californian right down to his love of the Dodgers and his dreadful Hawaiian shirts.  Born and reared in Visalia, a town with no California glamour about it. A working class town that John Steinbeck wrote about 75 years ago. He met and married Debbie Carroll there, they had four children and Rick and Deb shared that most awful of fates, the loss of a child, son Tanner back in 2006.

He and Deb parachuted into Marion in 2017, in the darkest hour of the Rescue Mission’s existence. It had been wracked by inattention, theft and scandal and he set out on day one to make that only a distant unpleasant memory.

Inside the mission building at Fifth and Gallatin streets he went about the business of feeding the hungry and transforming lives. He set out goals for men – and women – and shared in their accomplishments with public graduation ceremonies.

He turned the necessary business of running a fund-raising secondhand store into something like a high-fashion  and style emporium.  He would occasionally show up on my front porch with a collectible he was certain I would treasure, all for only five bucks.

My regret here is that I never got to know Rick Berbereia, not beyond the business of the day.  He was politically astute, but didn’t much care about that. I learned only from reading his obituary that he had a long career in retail sales business before he turned from capitalism to rescue mission ministry. Why the change? I don’t know. I never asked him.  But that explains why I played that silly slot machine; he hadn’t forgotten how to sell.

However it happened, Rick, we’re glad you stopped by. We shall remember you.

Street vendors at Marion Chronicle in 1900

Let’s face it: News media here in our town in Indiana  — and that includes the newspapers, radio and whatever those things are that sprout on social media – no longer look out for  your best interests in the public square the way they once did. Actions by courts and councils go unreported.  Essentially,  no one is watching the henhouse any longer.

And the hens know that and they have begun to do just about whatever they want to do with the certain knowledge that no one is watching. Not the watch dogs, not even the dreaded fox.

Now, I’m torturing an old adage here for a reason. And the reason is this: In all the shelves of law books, in all 30 volumes of what’s called the Indiana Code – that’s the compilation of all the laws, good and bad  that govern we Hoosiers – there’s only one scant reference to our right – yours and mine – to know what government is doing for us or to us. Just one law that says each of us has the right to be there in the room – courtroom, council chamber, board room, interrogation room —  and be a witness to whatever folly government in all its forms is about to unload.

It is the Open Door Law and its younger sibling, the Open Records Law, that protect us from, or at least help inform us of the shenanigans  that come from city halls, town halls, police stations, prosecutors’ offices, courtrooms, commissioners and council chambers, and all those other nooks and crannies where elected officials and their minions do their deeds.

Used to be that reporters from the local daily poked their heads into those dark, dank places every day. Clerk’s office to get all the court filings and dispositions. Police station and jail to get the names and charges against everyone arrested.  School  board and city council meetings to get explanations from those we elected for what they had done – or not done – in light of what they told us they would do.

One such case dealing with city council conduct behind closed doors is being tested by a Marion resident right now under that Open Door Law, which came to Indiana in 1977. The Open Records Law came six years later.

Everything changed  shortly after the turn of this Century when the tsunami, the tidal wave that is the internet, scoured the landscape and washed away all the advertisers and subscribers whose dollars and patronage had made it possible for newspaper editors to hire those reporters to poke in all those dark corners and report to the rest of us what they had found.

With that information, we could form judgments and respond accordingly. We could demand action from our elected and appointed officials. We could require explanations. We could expect responsive government.

And most local news available on the internet is irresponsible, incomplete and frequently libelous.

Washington Post columnist Perry Bacon sees it this way: “There is a growing recognition that the collapse of local news and information is a crisis undermining the United States’ politics and communities.”

Put another way, 211 counties in these  United States  no longer have a daily newspaper of any sort, good, bad or indifferent. And there are certain to be more.  The moniker created to describe these places bereft of necessary information is “news deserts.”

Can’t put the blame on the owners – or former owners — of the newspapers. They were there to make a profit; take away the advertisers and the subscribers and the profits vanish.

And we can’t put the blame entirely on those hundreds of little men and women who found a home in local government.  After all, it is a very large and unattended cookie jar.

That brings us back to the legacy of a Kokomo boy named Dick Cardwell who grew up,  went to law school, loved both the law and journalism, devoted his long life to urging both publishers and lawmakers to do the right thing.

‘Twas he who had the wisdom to write both pieces of law – the Open Door and Open Records statutes – and the strength to bring reluctant legislators to vote for their adoption.

It remains for us to honor his legacy by doing what we must do to protect the necessary flow of information until a new way is found to keep the foxes away from the henhouse.