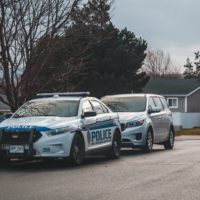 Detectives with the Marion Police Department are looking for a suspect that was involved in a weekend robbery.

The press release states that an employee was at the cash register when a black male came in, displayed a gun and demanded money from the register.

The employee reportedly complied, giving the suspect an undisclosed amount of money. According to the press release, the employee told police there might have been two other males involved in the robbery, but only one suspect displayed a handgun.

The suspect then left the store, got into a black SUV that was parked at a gas pump and traveled west on SR18, according to the press release.

Police believe the suspect was a black male, wearing a reddish-colored sock hat, a gray sweatshirt and sweatpants, black shoes, black gloves and a dark-colored mask over the bottom half of his face.

Anyone with information on this incident is asked to call the Marion Police Department at 765-668-4417.