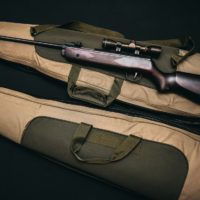 Marion High School JROTC Cadet Alysa “Muffet” Yancey is quickly becoming a nationally known junior marksman. She participated in the Civilian Marksmanship Program’s (CMP) National Championship for Three Position (3P) Precision Air Rifles in Camp Perry, Ohio, this past weekend. Competing against a field of 183 invitation-only marksmen, she faced the very best from across the nation. But this emerging star rose to the occasion, finishing 23rd overall.

Invitation to this competition was reserved for only those athletes who were either state champions or had qualified for the Junior Olympics. Yancey finished an amazing 37th this year from a field of 83 in her category (J2) in her first trip to compete at the Junior Olympics.

“This young lady just keeps getting better,” said her coach, retired Lieutenant Col. David Farlow, Marion High School’s JROTC’s Senior Army Instructor. “I mean, every week she improves. She is now just a few points away from the very best in the nation.”

The two-day CMP National Championship consisted of each marksman shooting 60 for record shots daily, with 20 shots in each of the three positions of prone, standing and kneeling. The best possible score is 600. Yancey shot a 584, and a 587 during the course of fire. On the second day she shot her personal records in the prone and kneeling positions, with a 200 (perfect score) in the prone and a 199 in the kneeling.

“I was very happy with my shooting on the second day,” Yancey said with a big grin. “Especially since I had not had a lot of time to practice shooting the Air Rifle.”

This was the sixth national-level competition in which Yancey has competed this year.

Yancey also shoots what is known as “small bore” .22 caliber rifles for competitions. This week she is shooting in the CMP National Championship for small-bore rifles. She shot in the National Rifleman’s Association Small Bore Championship at Camp Atterbury earlier this month.

“Ok, think about this. In just two years of shooting she is now in the top 12 percent of the nation,” Farlow said. “She was shooting against graduating seniors who have already committed to shoot for collegiate teams this fall. She is a gifted marksman who is diligently working to improve her skills.”

The CMP National Championship is a rich recruiting ground for coaches of collegiate teams.

“About 10 college coaches came by and watched Muffet shoot, all taking notes,” Farlow said. “And she has just completed her sophomore year of high school. So she is definitely on their radar screens now.”