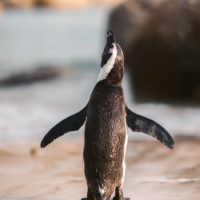 Six African penguins at an Indiana zoo have died after getting sick with avian malaria. The Columbian Park Zoo in Lafayette said Tuesday that penguins Chartreuse, Flash, Fozzie, Raspberry, Zing, and Zip died despite round-the-clock care and the use of anti-malarial medications. Zoo director Neil Dale said the zoo’s three remaining African penguins, Donner, Sagely, and Shazam, also have the illness and are in critical condition. Avian malaria is a parasitic disease spread by the bites of infected mosquitoes. It only affects birds and cannot be spread to humans.